The costume of listening to or reading travel experiences, pathways towards something distant and not yet reached, made that the imagery to what is distant and unknown assume a greater importance in determining our perception of geography and meaning of our presence in some places. Depending on how a place or an event, for example, are told in pictures or words we tend to place them in a space, to construct meanings and projecting wishes. Precisely because the constant dialogue of the association 22:37 grows at a distance, trying to maintain a critical approach on issues deemed urgent not only in cultural, but also the social context in which the association is active, for Indipendents3 22:37 proposes a reflection on nomadism and imaginary, presenting two projects that explore, challenge and expand the geography of some places. Errant geographies reflects on a particular strategy analysis and re-appropriation of an image by four artists. The assumption of space, through practical action of wandering, meant both as a way or path, and as error, becomes not only aesthetic practice, but critical tool to deal with some issues of imaginary and its ability to convey specific meanings. Through the exploration, wandering, crossing or drifting within these imaginary, it is possible to discover the existence of an unusual geography, it becomes possible to replace a real space the places that the images tell, speak critically about reality and then build a new history. These actions will be told by the works Around the world in eight hours by Nina Fiocco and Nicola Turrini, Something white, a walk with Tomas Espedal by Marco Godinho, Die undichte stadt (The permeable city) by Stefania Migliorati, A guide through exhibitions and cities, guide site specific by Boba Mirjana Stojadinović. 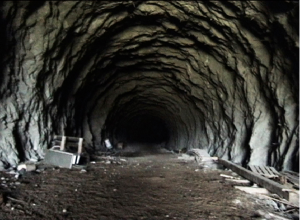 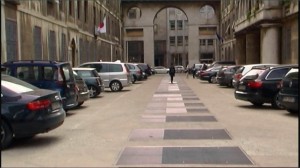 Nina Fiocco and Nicola Turrini, AROUND THE WORLD IN EIGHT HOURS, video. 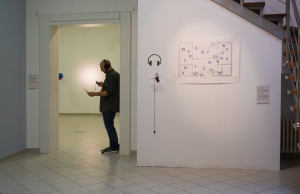