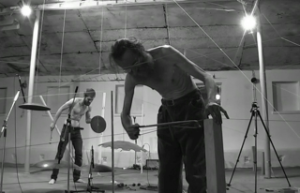 Sound installation, performance and video art composed Feedback, a project born of a collaboration between Imrich Kovács, Milan Adamčiak and Luis de Matos, that took place in one of the hangars used by the no-profit 4D Gallery, situated in Galanta, Slovak Republic. Steel wires, strings of different materials and thickness, metal plates, resonant objects, microphones, hanged, drawn, hung up the installation that propagates in space, giving shape to blocks isolated, like real rooms where the players use the experimental scores as if they were adventurous routes to know where to forward and face the next challenge. Can be detected into five stations, but they are not defined, their discovery depends on understanding the possible variants of the sound space and also by the different mobility of artists within the installation. The inscriptions of the camera by Luis de Matos stress and investigated the experimental sounds of the work of Kovacs Imrich and musicologist Adamčiak Milan. As the performance proceeded, it became clear that the dynamics of the electroacoustic play was dependent on the rising and silencing of the feedback repetition which appears in different intervals. The absorption of the feedback sound interferences became a part of the concept as the performance discovery process advanced. The sound architecture has been explored with the attention and the instinct belonging to the improvisations, the three artists have investigated thoroughly and individually the space for approximately twenty minutes each enacts with amplification and artificial lightning. Another twenty minutes exploration was performed with natural light and without amplification. The editing of the recordings will present many variants and forms of this phenomenon, providing a vast variety of output products.